Perth woman, Vicki Leaver, is one of our members, who in more normal times uses Perth based venues for her own fitness and her growing family’s sporting activities.  Over lockdown Vicki has joined the thousands of Perth & Kinross locals who have tuned in to our At Home Hub, following virtual workouts and family fun as well as the more inventive challenges. 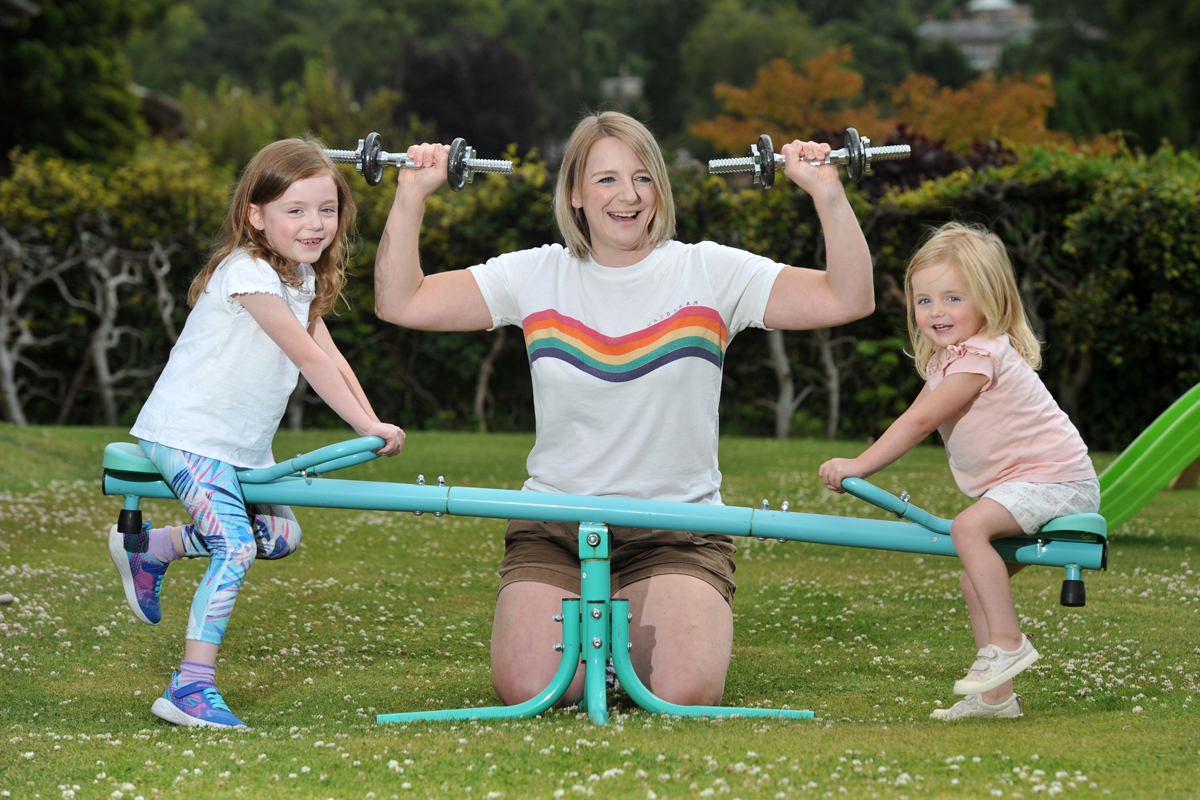 Vicki is part of Parent Club Scotland, and has been involved in various work including a family video campaign for healthy eating,  the "read play learn " bookbug bags and more recently, their coronavirus top tips.

How long have you been a member at Live Active Leisure?

I’ve been a member on and off for the past 9 years, and in fact, took part in a promotional campaign back in 2011 when I was paying per class for Zumba and had decided to brave a gym induction - I really loved it and that was probably the start of my fitness journey with LAL.

My oldest son, Dylan is now 18 and he’s been on a bit of a personal fitness journey in the past year.  Because of that we all started getting a bit more competitive with our steps and before long we’d caught the fitness bug again. He bought me an annual membership for Christmas and I had just gotten back into a regular routine before lockdown started!

I’d also normally be taking the wee ones – Jasmine (3) and Lily (6) – to swimming, the soft play at Bell’s Sports Centre and gymnastics classes.  As a family, we’re big users.

What is your main reason for exercising?

After Christmas I’d say it was mental health reasons that pushed me - I wanted a wee boost for myself.  I turned 40 and just felt different; when I exercise I feel better within myself.  I found that it quickly became a habit again and before long I had that fitness buzz – you feel fantastic when it comes!

That in turn is good for the kids – If you have something for yourself, where you can be your own person and not ‘just’ a mum you have more to give.  I also like that it’s laying the groundwork for the girls attitude to fitness – Lily always says “when I’m a big girl can I come to the gym with you mummy?”  It’s one of those mysterious things that grown ups do!

What have the family been doing during lockdown for exercise?

It became apparent early on to me that the easiest way to handle the situation would be to find something we could all do together.  Because they were with me, no one was shouting for Mum - trying to exercise while a two year old and six year old amused themselves in another room was never going to work!

We started like everyone did, with Joe Wicks. I think we lasted about a week and we were looking for something new – he’s pretty full on is Joe!  We went with cosmic kids yoga which led to me doing other yoga routines, joined by Jasmine who loves a downward facing dog. In fact now she’ll just drop into a bend at any given moment.

Dylan, my eldest, is working from home but he has been up early and doing a run at 6am every morning as part of the couch to 5K programme.   Because he’s in the house for most of the day, taking calls from SSE customers, getting the wee ones out is a high priority for me. They go stir crazy after a while and Lily squealing isn’t what you want to hear when you’re chatting about your electricity.

We’ve been following the LAL Facebook page for inspiration which led us to kids Zumba and the geocaching trend which is a great way to get everyone out and walking.   This week we’ve done the Alphabet of Exercise from their posts which was an intense 20 second blast of 26 different exercises – intense!

We’ve downloaded Pokemon Go which led us up Kinnoull Hill for a nice long walk – it’s amazing how far they’ll go if catching a Charizard or a Mewtwo is on the cards.

Lily and I have also been doing the Couch to 5K programme. We’re on week 6 and I have to say, I’m impressed. I’m no runner – think Phoebe from friends – but I needed something to keep Lily more active and away from the apps she was beginning to get sucked into.  It’s been a great Mum/Daughter challenge to do and last month we joined in their Travel The World campaign, recording our steps while out for our run.   I’ve never run so much since secondary school!

Around all of that I’ve downloaded a Calendar of national days – it’s a bit of fun and we’ve done things like the National Lollipop Day so as you can imagine the kids love it! For me, it’s been a mixture of thinking outside the box and keeping it simple.

What have the kids thought of you doing exercise at home with them?

They seem to be enjoying it a lot; they’ve enjoyed all the exercises particularly the yoga and Lily has been trying to pick up my weights!

I’m an at home mum so they’re used to me being around but not in such a constant way. We’re usually at playgroup, or Bell’s soft play or the library so it’s been strange living inside our wee bubble.  Things are easing now but to being with they were poking their heads above the hedge and shouting to their friends over the back.

Incorporating challenges like the running and fun like the Pokemon and Geocaching has helped a lot I’d say.  LAL’s At Home Hub has been great!

What have you missed most? What will be the first thing you do when LAL reopens?

The kids have really missed playgroup and seeing their friends – normally we live in coffee shops, meeting other parents and I’m desperate to get back.

For me, I’ve really missed my hour in the gym a couple of times a week.   I walk through the door at Rodney and I’m just Vicki again – it’s really important to me to have that time and I relish it. I like to use the resistance room and the at home weights just haven’t been the same – particularly as Jasmine is in the room trying to pick them up as I workout.  Not exactly switch-off time!

Where will you head to first when venues reopen?

All along I’ve been saying that I’ll be the first person banging on Live Active Rodney’s doors! I miss the social side of the gym, being my own person, taking time for me. I have to admit though, I am nervous about it and I think it’ll be strange to be back after being away for so long.  I’m watching with interest to see what the team at LAL puts into place - hopefully you’ll be given the go ahead soon and I’ll be back to proper weights without any little assistants!