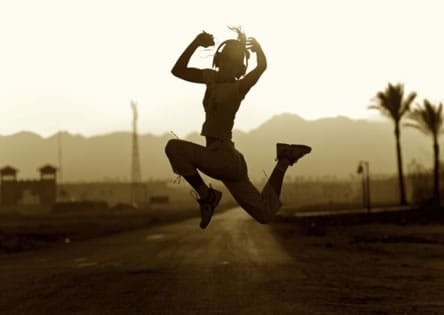 What we’re about to tell you will not be news… But it may surprise you to find out that this one decision is almost as important as your gym equipment, chosen class or fancy new trainers.  People, we’re talking about your choice of workout tunes.

We all know that exercise is better with music.  Take yourself as far back as 300BC to rowers on the Roman Galleys and you’d find one guy at the front, beating a drum to drive the basic rhythm of the rowing.  People naturally follow a tempo and so it allowed the crew to get into a smooth swing and in turn, this helped coordination so that they would row together. A clever lot those Romans.

Anyone who’s ever taken part in a Les Mills Class will know exactly how this principle has been applied to modern day exercise.  You can be at the front, eyes focused on the wall ahead and yet without looking around, you will naturally bend, lift or spin in time with everyone else as one synchronized class.

Now, take yourself out of the perfectly executed playlist of a Les Mills class and onto the treadmill; how much quicker does a 15 minute session with music go versus the one where you forget your earphones?  As well as going faster, somehow everything about your feet hitting that tread in time to a Calvin Harris track makes the whole thing so much more enjoyable!

This isn’t just some placebo effect generated by the millions invested in Sony Walkman (last I checked the Romans were not wired for sound!). Music has been scientifically proven to have a positive effect on the actual level of your performance.  Costas Karageorghis PhD, from London’s Brunel University School of Sport and Education is one of the world’s leading authorities on music and exercise.

“Music is like is a legal drug for athletes,” he says. “It can reduce the perception of effort significantly and increase endurance by as much as 15 percent.”

Over two decades Karageorghis was able to identify three key things about music that could positively influence YOUR performance:

Since then other studies have shown that synchronous music tends to drive exercise intensity - so the faster the beat, the higher the intensity. They also clearly prove that an increased desire to move is directly related to the tempo of music, therefore making intense exercise seem less stressful.

Now, you can simply choose your new favourite song and hit the gym or running track (in LAL classes our expert instructors have done it all for you!) but if you really want to gain maximum benefit then researchers suggest pulling together a selection using some old and some new songs that meet the following six criteria:

British rowing Olympic gold medalist James Cracknell used the persistent rhythms of the Red Hot Chili Peppers during training and his pre-event routine.  The steady rhythm is perfect for rowing.  If it’s good enough for the Olympians….!

Coaches, instructors and performance athletes will work out the beats per minute of a track which in turn allows them to sync the speed of their movements.  For example, if you are warming up on a gym bike at a pace of approximately 65 rmp, commercial dance music, typically in the range of 120 to 130 bmp, is ideal as you can take half a pedal revolution to each beat of the music (Karageorghis & Terry, 2011).

I have to admit to bring a bit overwhelmed at this point but if you’re serious about enhancing your performance and want to find out more then websites such as http://songbpm.com can tell you instantly about your favourite track’s beat per minute.  To plan a music program to sync with your chosen activity try http://jogtunes.com/jtc/jtcplaylists1.php.

Me, I took the easy way out and asked the Live Active Leisure and Small City Facebook Fans to recommend their favourite tunes.  Here they are, in no particular order!

Other great suggestions included straight to Spotify for their Workout Playlist! https://play.spotify.com/.../playlist/5xtPbr795elinw40DsMnTY and anything by rage against the machine and the prodigy. Angry music is apparently also great for working out!

Let us know yours by posting on the Facebook page!