Aoibheann (17) and Oisin (13) Lindsay-Dorward are the sister and brother fencers who have both been selected for Live Active Leisure’s emerging athlete programme. Through this programme they train twice a week with Gil Stevenson at Bell’s Sport Centre,  as well as fencing 3-4 nights a week with Salle Ossian.

Aoibheann was shortlisted for selection to the Scottish 5 nations Juniors - which was scheduled for the 27th and 28th June in Manchester - and is currently ranked in the top 5 in Scotland at Junior level.  She is a silver medallist, winning at the Scottish schools in 2018 and has competed in several junior competitions.  This year, her hope is to improve her British ranking.

Oisin was selected to represent Scotland at Challenge Wratislavia in Poland having won the Youth Development series 2018/19 in his debut season before going on to win the silver medal in the 2019/20 competition.  He is currently aiming to climb the British ranking levels at Junior level, and to be selected for Scotland at U15 and U17 levels.

How were you introduced to your sport?

Aoibheann (A.LD): We both started Fencing at Carnoustie High school, however due to the relocation of the coach, we needed to find an alternative. After an online chat with Phil Carson at Salle Ossian we started to travel to the club and before we knew it, we were attending 3-4 nights per week because it was so fun.  Once we started to get serious about the sport our whole family moved to Perth because we were travelling so much!

When did you know you were on a performance pathway / realise this was going to go further? 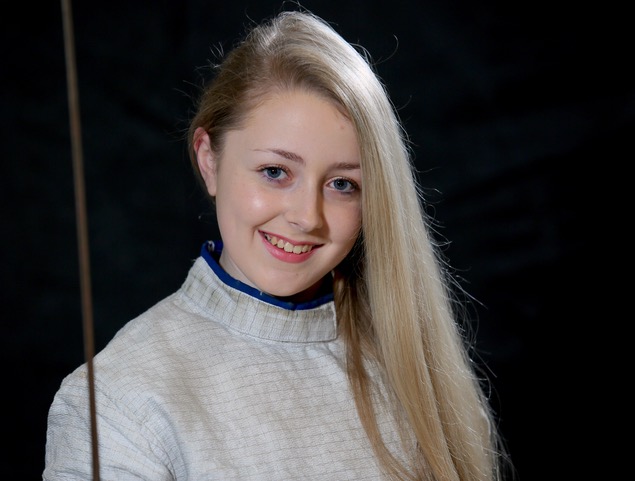 Oisin (O.LD): About 18 months ago our enjoyment of the sport had taken us both to the point where we wanted to push for more.  At the same time, the pathways applications for the Emerging Athletes programme at Bell‘s Sport Centre came up and so it was a natural progression for us.  We were both so lucky to be accepted onto it.

What do you enjoy most about your sport?

A.LD: No matter what level you’re at, be it a beginner or a seasoned veteran, whether you want to compete or just have fun, there’s a place for you.  Everyone at the club has the same ethos and wants to see their fellow team mates succeed.  We’ve made friends with people from all over the country and we also keep in touch with a few people on an international level.

What is your training regime on a regular basis and how are you keeping that up during lockdown?

O.LD: On Monday and Wednesday we both take part in Strength & Conditioning training at Bell’s Sport Centre under the tuition of Gil Stevenson.   This is part of the Emerging Athlete Programme run by Live Active Leisure and we feel really lucky that a recognised expert is able to support us in this important part of our training.

Usually, from Monday to Thursday we train from 6pm to 9pm at the club where they have 1-2-1 lessons as well as practice bouts and mindfulness sessions.  During lockdown the coaches at Salle Ossian have us working remotely using the coach logic app. This has kept us in training and helped our overall fitness as well as working on our techniques and footwork.

What do you consider your biggest achievement to date?

A.LD: Being shortlisted to fence for Scotland was a great honour and a real source of recognition.  However it has been bittersweet given the postponement!  I’m hopeful that it will go ahead in the autumn and will be focused on training hard between now and then.

O.LD: It was great to be chosen to represent Scotland at Challenge Wratislavia in Poland which is one of the biggest fencing tournaments in the calendar for my age group.  I will always remember that moment!

What are you most looking forward to in the coming 12 months?

A.LD : Getting back into club training! I’d like to develop my coaching skills to help support the upcoming fencers. I also think it will allow me to look at and perfect my own performance technique.

O.LD: To follow in the footsteps of many other fencers at Salle Ossian, in particular Rory McClelland who is currently ranked British No1.

What would be your advice for other people looking to get into this sport?

A.LD:  I wasn’t the most sporty at school and team sports just weren’t for me but the coaches at the club are great and made the sport fun.  Some people think fencing is a sport for rich kids but really it’s as cheap or as expensive as you want it to be.

O.LD: I enjoyed sport through primary school, however fencing is different.  It’s an individual sport but there’s a real team focus about it and you can make it as serious or as fun as you want it to be. It’s also much safer than I first thought it might be!

Find out more about Salle Ossian and fencing >>>