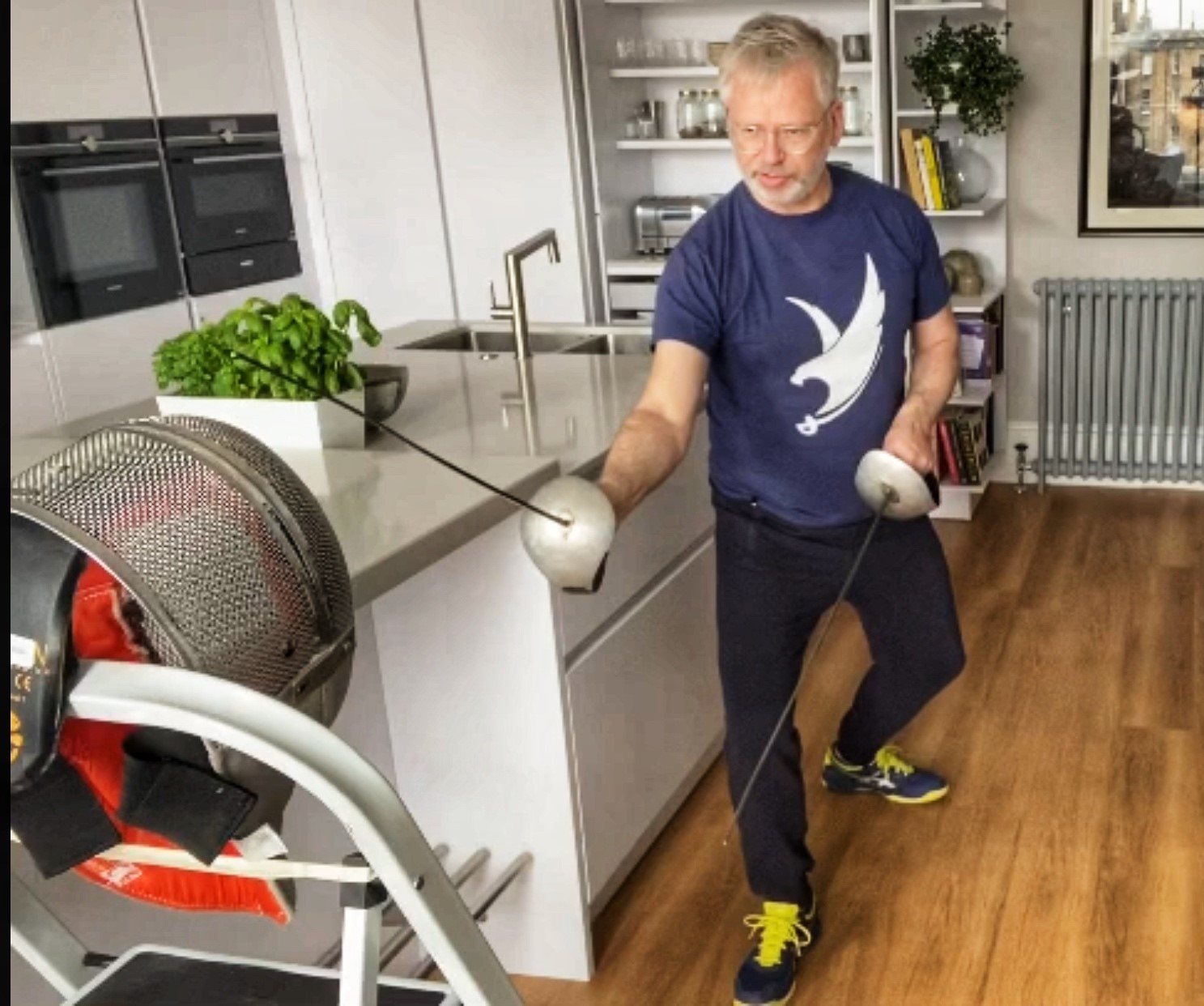 Fencing is a fast, dynamic and exciting sport that has held its place as one of the original sports in the modern Olympic Games.  An exciting mix of athletic sport and tactical combat, it exercises both body and mind in a safe, challenging and fun environment.

Here in Perth, Salle Ossian Fencing Club has been running for 8 years, and offers both learning opportunities for beginners, the chance to play for recreational fencers and a performance pathway for experienced players.  As well as producing a slew of decorated competitive fencers in all age groups, the club itself was awarded British Fencing Club of the Year 2017, Club of the Year in Perth and Kinross Sports Awards in 2016 and was also Swordmark SuperClub Accredited in 2018.

Phil Carson is one of the Salle Ossian coaches and Scottish Fencing’s National Coach Manager. He is also one of the most experienced coaches in the UK with over 40 years fencing experience and over 15 years of coaching youngsters on to the GB team.  He is passionate about the benefits of sport and firmly believes that all kids are talented.  His aim with Salle Ossian is to develop a club culture that is truly inclusive and nurturing.

He commented, “First and foremost we’re a family and community club and our aim is to provide access to high quality facilities, equipment and coaching here in Perthshire.

“We also work with Perth and Kinross Sports Development and Live Active Leisure’s Active Schools programme to promote the sport in schools across Perthshire.   Naturally, this places us in an excellent position to identify and nurture talent, and to provide pathways to high level performance.”

Fencing is a naturally sociable activity and is accessible to everyone; young and old, male and female, able-bodied and disabled alike.

Carson continued, “Many people who wouldn’t consider themselves sporty find they enjoy the unique mix of skills used in fencing.  Contrary to how it appears, fencing is a really safe sport and is ideal for youngsters looking for a new challenge.

“As a combat sport, fencing offers a great way for children to get rid of all their energy and emotion constructively and it also helps develop many other attributes including speed, coordination, balance, timing, concentration, team-work and tactical thinking, amongst many others.

“It’s also a surprisingly inexpensive sport to start. The club provides safe fencing equipment meaning all you need is indoor trainers and loose clothing.  We’re fortunate to have some of the country’s best coaches in our club and out of this combination of great facilities and dedicated personnel we’ve created opportunities for both team and individual competition at regional, Scottish, UK and Olympic levels.”

Blair Cremin, Pathways Manager for Scottish Fencing comments on Salle Ossian’s success. “The successes that Salle Ossian athletes have had in recent years are excellent, but what makes the club stand out as one of the Scottish Fencing SwordMark “Super Clubs” is their ability to grow a community.

“By putting the needs of the member and their family first, they have created a space where people feel comfortable. Children and adults of all ages and abilities want to be at Salle Ossian because of the welcoming and challenging environment that the coaches and trustees have worked hard to cultivate

Q & A with Phil Carson, coach and volunteer with Salle Ossian

For those who don’t much about fencing, can you explain it?

PC: “Fencing is a combat sport based on the ancient art of sword-fighting. The aim is to hit your opponent whilst blocking or evading their attempts to hit you. In competition, a typical fencing fight finishes when one opponent reaches 15 hits.

There are three variants of fencing each using a different type of sword - the foil, the epée, or the sabre. The three weapons differ in how, where and when you may hit your opponent, resulting in different styles of combat.  It is a sport rich in tactical variation and players can develop their own style of combat suited to their particular strengths.”

What was the initial impact of the lockdown on Salle Ossian?

PC: “As with many sports, the virus brought the season to a sudden end.  We missed going with Rory McLellan, the British no.1, to the World Championships in Salt Lake City and most of our youth players should have been going to Poland for the prestigious Challenge Wratislavia event.

“We were also on the verge of delivering the next stage of Project Forte, our ‘changing lives through sport’ programme aimed at helping survivors of violence to rehabilitate.  The programmes in Perth, Dundee and Fife have been postponed until a point in the future when something approximating normality returns.  Our thoughts are very much with the organisations who are continuing to work in even more difficult circumstances to support our communities.

Tell us more about Project Forte?
Robbie – this might be a breakaway article that could run as a stand-alone piece?

​PC: “Project Forte is a Sport for Change programme developed by Scottish Fencing.  It is aimed at community and hard to reach groups and in particular, it has been found to have a strong therapeutic benefit for survivors of violence and trauma.

“The French Fencing Federation (FFE) has worked with fencing practitioners for a number of years using fencing sport workshops as part of the healing process following physical trauma, including sexual violence.

“It works because fencing-themed practice inspires and motivates survivors to reconnect their physical and mental beings and to learn and develop skills and attributes such as self-control, self-confidence and self-belief as they work with others to rebuild lives impacted by violence or surgery.”

“In June 2018, sport coaches from Scotland, France, Belgium and Canada, attended workshops and practical exercises to learn from their experience.  From there,  a number of short courses were run in Scotland with local community groups including RASAC Perth & Kinross.

“As a result, “Project Forte” was one of fifteen projects supported by the Scottish Government’s Women and Girls Fund aiming to make life changing difference.  By the end of 2019 we acquired the skills and resources to run a one year programme in a number of local authority areas in Scotland including Perth and Kinross.”

“We will certainly aim to reschedule as soon as possible once things have returned to something resembling normality.”

What are you doing during lockdown as a club volunteer and coach?

PC “Personally, I’m looking at this period as VERY long pre-season phase that has allowed us to refresh our website and our training programmes.  For example, we’re opening up for an additional training session on Fridays after school ones the club is re-opened.

“This will help increase training and capacity so we’ll be ready to take on new members at this point.  Anyone looking to give fencing a try, or to come back after a break should keep an eye on our website www.salleossian.com or like our Facebook page for instant news.”

How are the players keeping fit and remaining focused during lockdown?

“We’ve been very busy shifting the club activities online and I’m pleased to say the players have all taken it in their stride and remain as focused as ever.   We’ve set various training challenges on the website including ideas for fitness, fencing technical exercises, mindset training and physical challenges.

“We post these on Monday mornings to allow people to fit them into their own schedules. On Monday afternoons we have a Q&A between fencers and coaches to check up on welfare and make sure everyone understands the workouts and on Monday and Wednesday evenings we have online sport mindfulness sessions.  These have proven very popular and probably have higher importance regarding our athletes’ mental health.

“On Thursday afternoons we have a club quiz and afternoon tea, with 17 teams competing regularly and socialising.  It’s been great fun!”